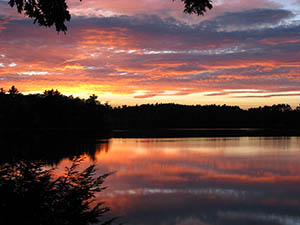 The town of China is in eastern Kennebec County, on the western branch of the Sheepscot River. The towns of Winslow and Albion neighbor China to the north, as do Vassalboro to the west, Windsor to the south, and Palermo to the east. Ten miles southwest is the state capital, Augusta.

China Lake extends from the north line of the town to the southwest, near Three Mile Pond. A passage called "The Narrows" connects the eastern and western halves of the lake; the western part extends into Vassalboro.

China was originally settled as Jones' Plantation in 1774. It was first incorporated as Harlem in 1796, but was later reformed to include parts of Albion and Winslow, and reincorporated as China in 1818. In 1829, part of its land was given to Vassalboro. The town is considered to have been named after the hymn Jesus Loves Me, which was titled China in some hymnals at the time, possibly because of its popularity with missionaries who traveled to that country.

Some of The Town of China's first settlers were Baptists and Quakers. Their original churches, The Baptist Church on China Lake and The South China Meetinghouse (on the National Register of Historic Places) still stand. Members of these religious faiths also founded summer camps for youths, which still operate today, China Lake Baptist Camp and Friends Camp.

In the 1800s, China was primarily a farming and industrial community, with brickyards, sawmills, gristmills, shingle mills, tanneries, shoe factories, and a cheese factory. A fire in 1872 burned 22 buildings and an avenue of elm trees, destroying some of the town's beauty and its prosperity.

Sites on The National Register of Historic Places

No account? Sign up now to save searches, listings, and get tailored listing notifications. It's free, opt-out anytime.