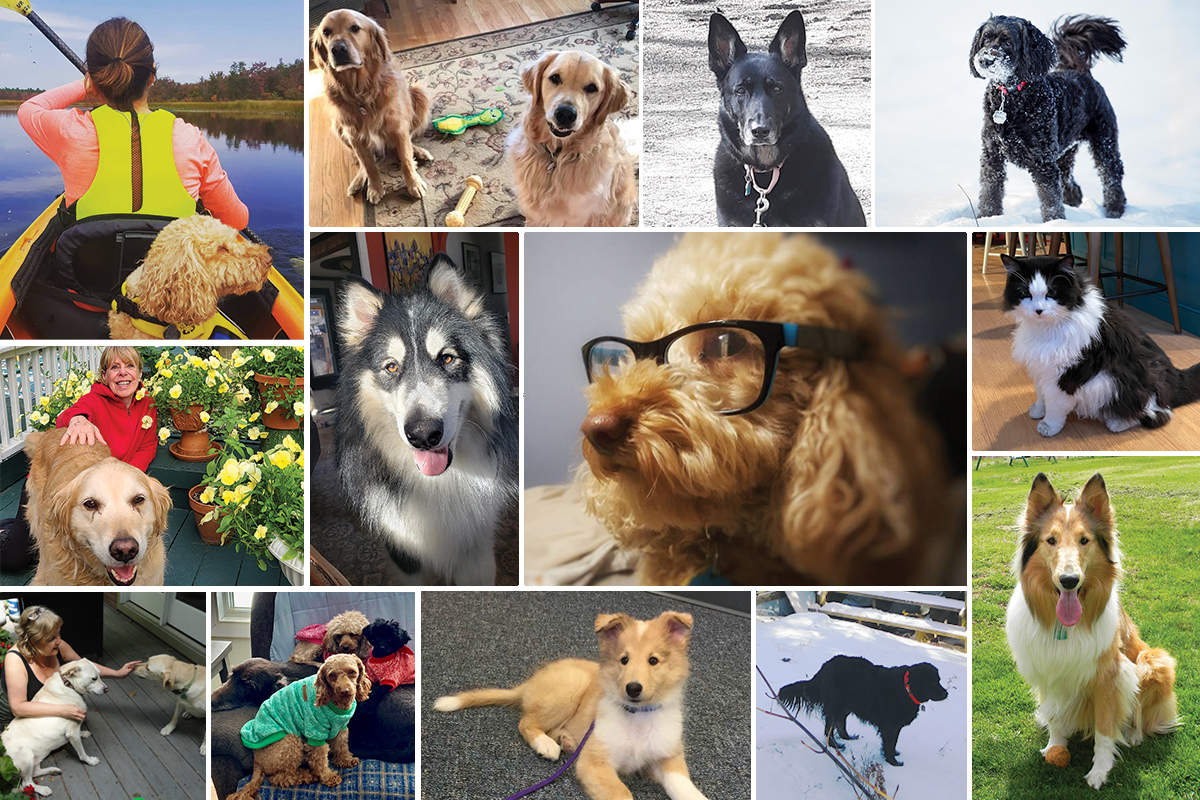 These may be the “dog days” of summer, but here at Rizzo Mattson Realtors, we LOVE that! Why? Because we truly love our dogs and are so grateful for all the incredible richness they bring into our lives. Would you like to meet the very special pooches who bring us their love-barks and wagging tails each day? Here we go!

Pearl and Valencia
Lovingly Cared for by Realtor Merrie Hanson 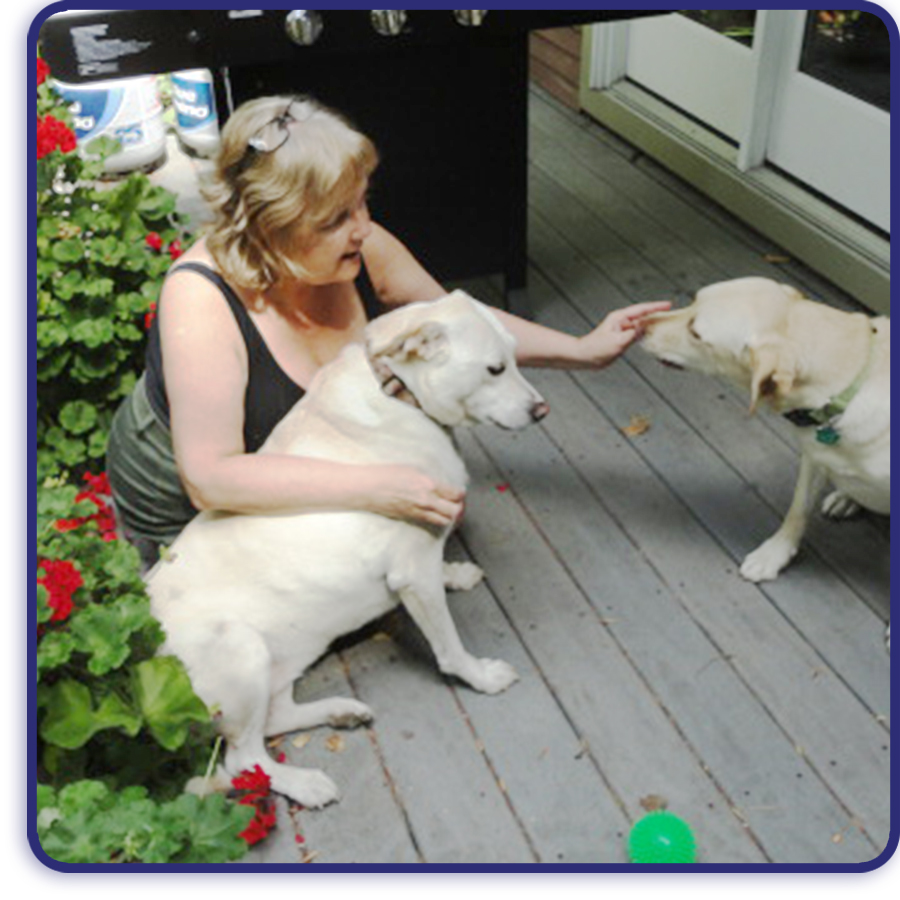 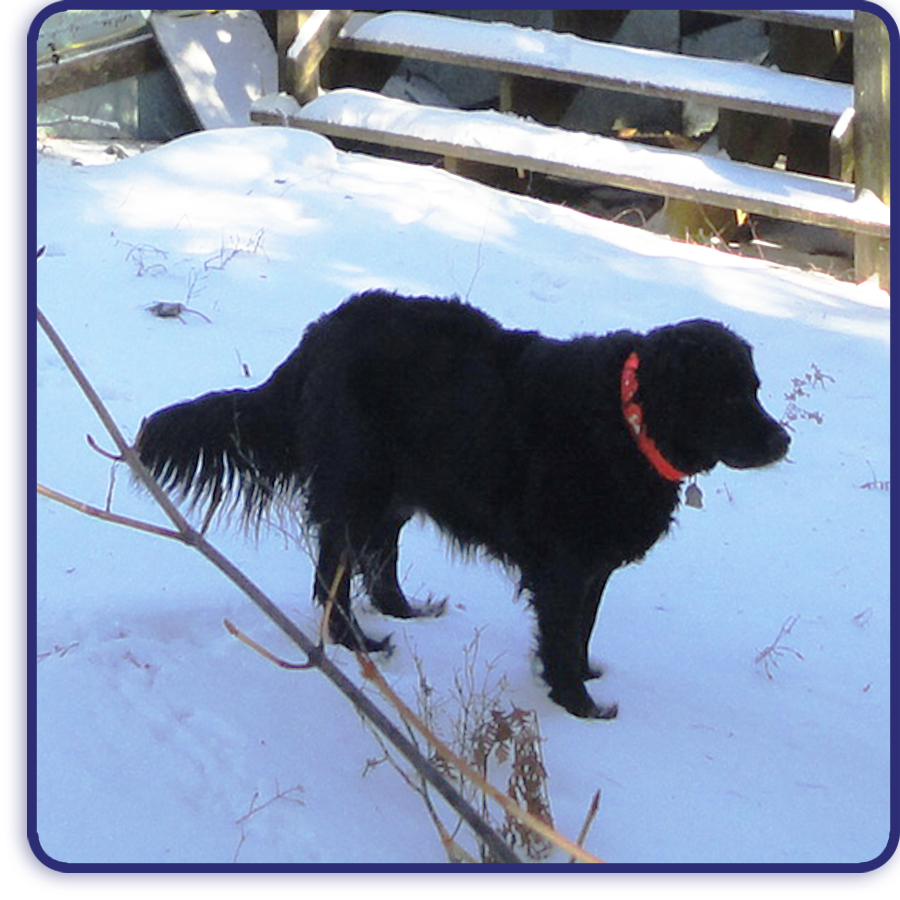 Pearl and Valencia are Labrador Retriever mixes whom Merrie adopted from Maine Lab Rescue as already-named female adults from the same home. “To be honest,” Merrie says, “I haven’t always been a dog person. In fact, when I was young, I was actually afraid of dogs! But the first real estate office I worked for had Great Danes, so I was forced to deal with my fear head-on, and it actually was a great way to overcome it.”

Merrie reports that Pearl and Valencia are big-time water babies. “They LOVE swimming and wading in the lake, and are huge fans of that age-old pastime, Throw Me the Ball,” Merrie laughs. Reflecting on her journey to a certified dog lover, Merrie says, “It’s quite simple: I came to believe a house without a dog is not a ‘home.’” 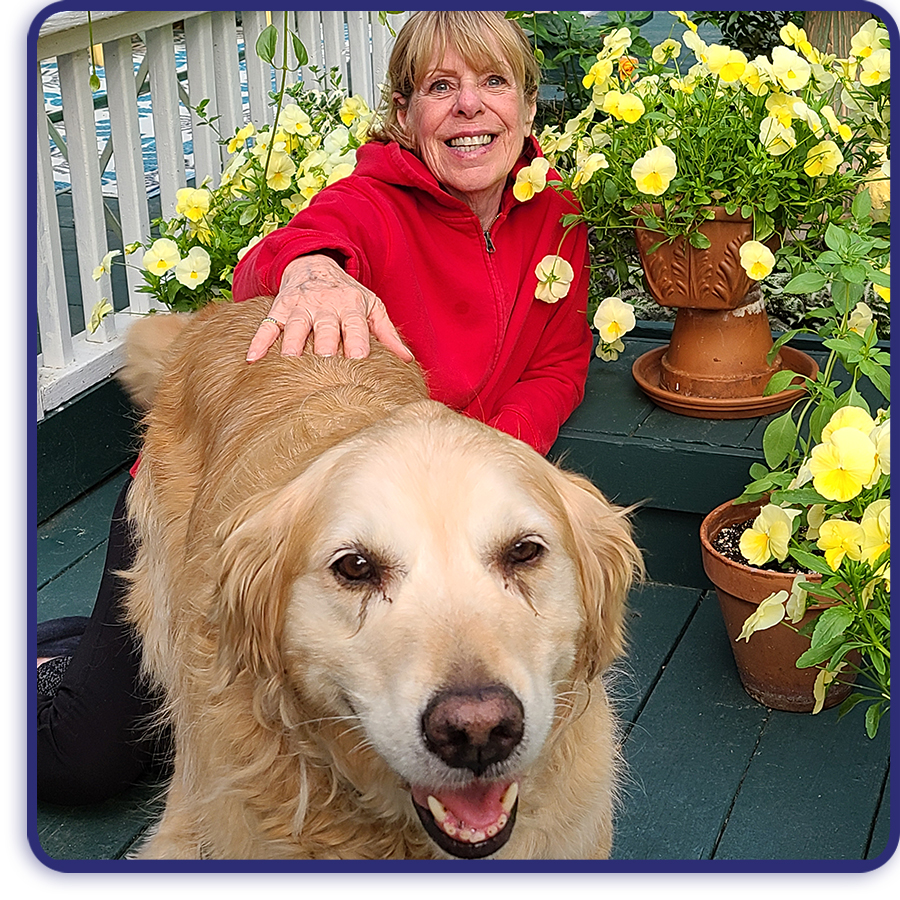 How fitting that Dublin brought her Golden Retriever magic into Geri’s house right after Geri’s family’s trip to Ireland! Geri reports that Dublin picked her family as much as they picked her. “Of all the litter,” Geri says, “she was the one who came over to us, licked our fingers, and closed her eyes in contentment as we patted her.”

Like Merrie Hanson’s Pearl and Valencia, Dublin LOVES to swim and also is a major fan of that all-time classic, Fetch the Stick. She’s a big people-pleaser, too. “No matter what goes on, even if we have to scold her, she is always at the door, wagging her tail and wanting our attention. She is always loyal and happy to see us—and it’s mutual!” 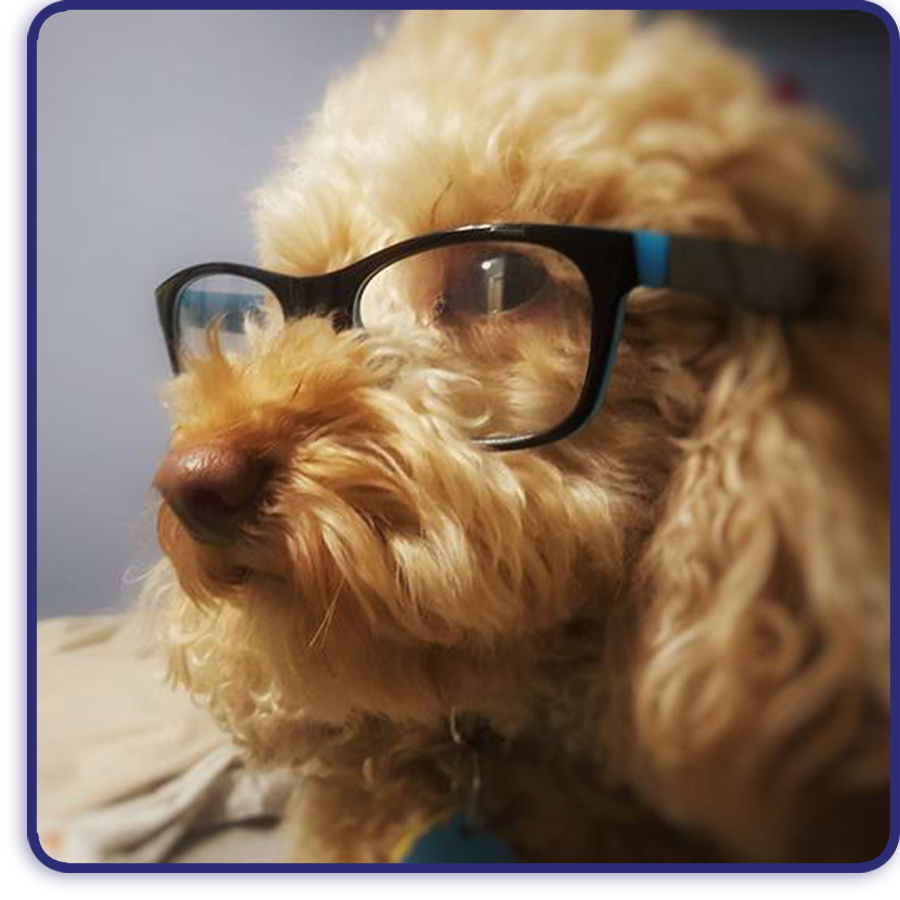 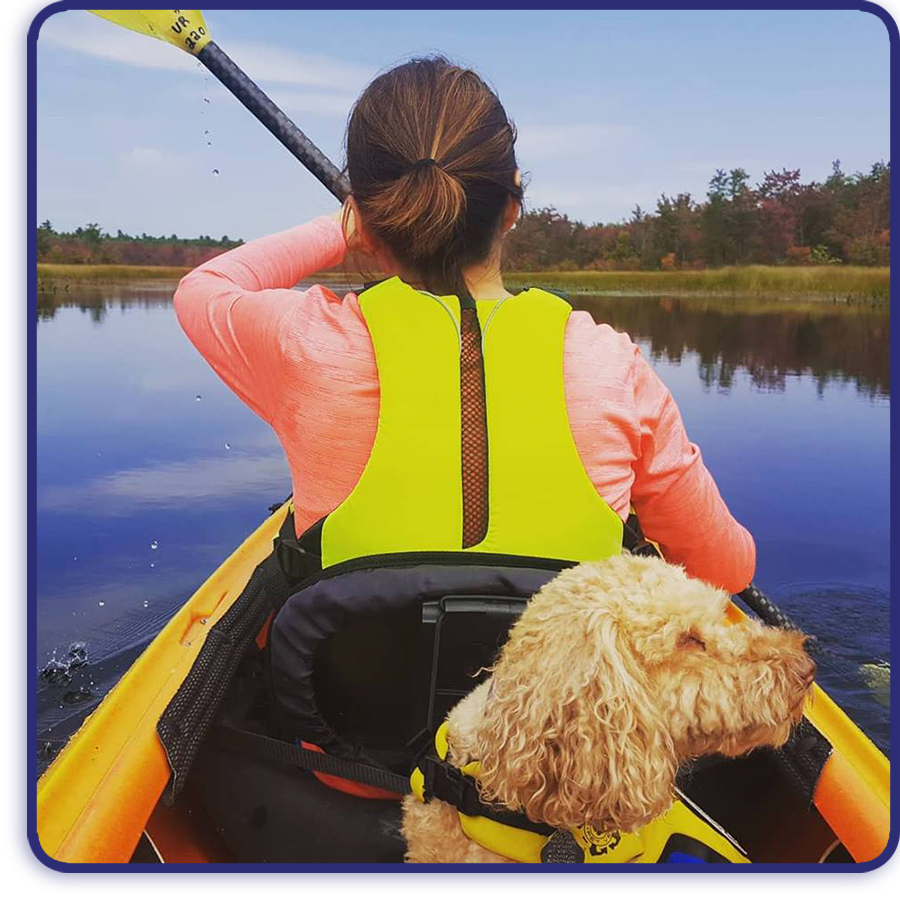 Tilly barks with an Australian accent, and for very good reason. She’s an Australian Labradoodle! Jenn reports that her family named Tilly after the old Australian bush ballad, “Waltzing Matilda.” “When I was young, we always had a family dog, but Tilly is the first dog I’ve had as an adult,” Jenn says. She also reports that the reason they got Tilly is, well, a bit ironic and amusing.

“We had a break-in at our house and decided we wanted a canine “Security System,” Jenn says. “Turns out, what we actually got was our own very special Insecurity System. Tilly is a wee bit clingy!”

Like all Maine dogs, it seems, Tilly is a huge fan of the outdoors. “We love anything outdoors, but hiking and kayaking are our shared favorites,” Jenn says. “Tilly is my partner in my grind AND unwind.” 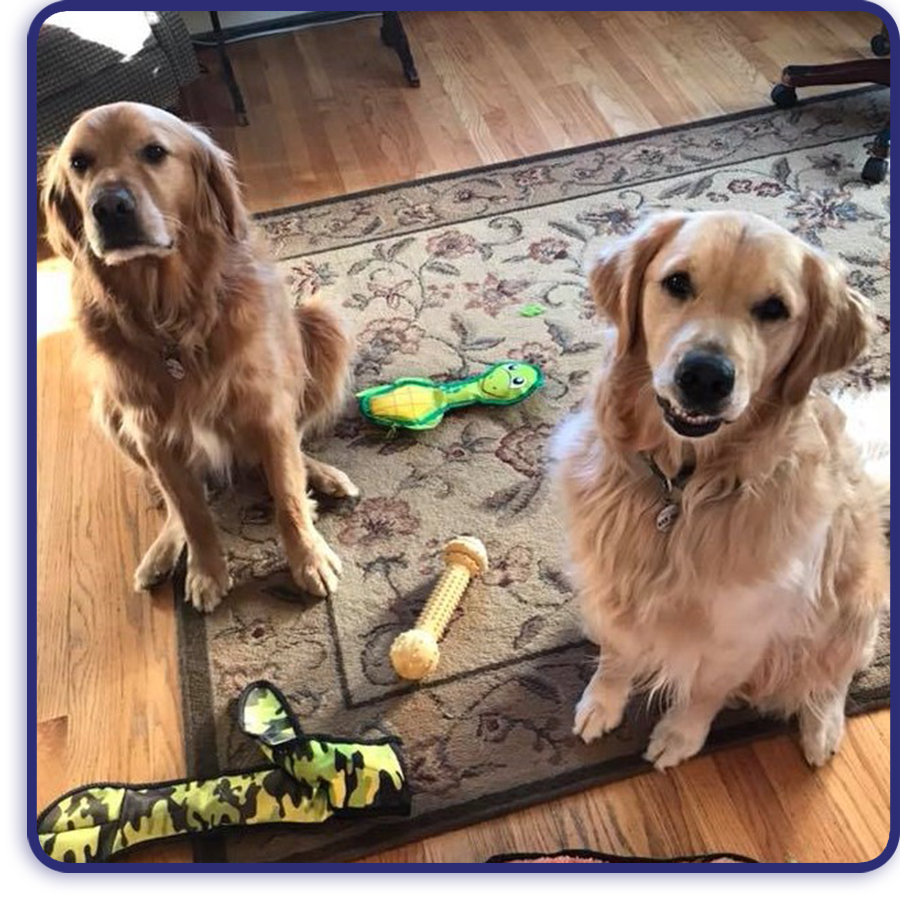 When you’re named after The Greatest Quarterback of All Time, you better be quite sensational. And Brady does not disappoint. Along with his fellow Golden Retriever, Tucker, Brady came into Ann Linscott Stiman’s life because of his remarkable ability to be ever-so-sweet.

“I’ve always been a dog person,” Ann reports. “I’ve been lucky enough to have a dog in my life ever since I was eight years old. With a dog, you get unconditional love, no judgment, and never-ending hugs and kisses.”

Aside from winning Super Bowls, what does Brady like to do? “Like many of the other Rizzo Mattson dogs,” Ann says, “he and Tucker LOVE the water. They also specialize in chasing balls and barking at our UPS driver.” 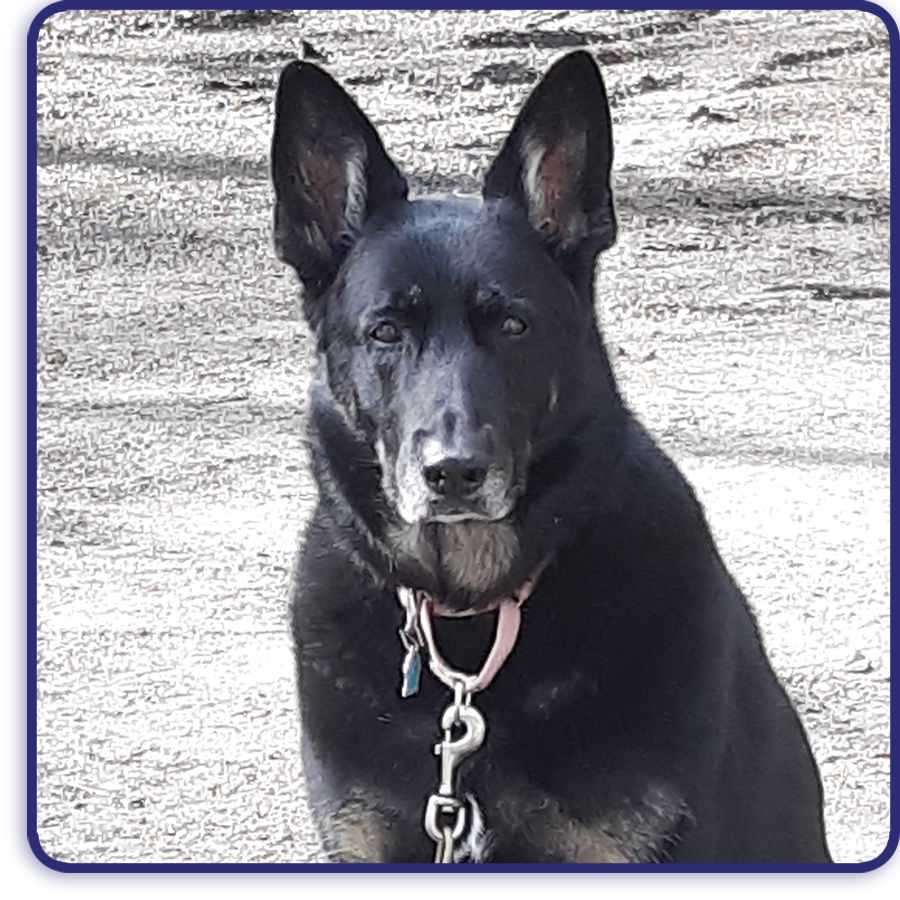 You’ve probably seen the small, classified-ads magazine Uncle Henry’s at many stores in Maine. And a certain German Shepherd named Sadie is sure glad Kris Beaulieu’s boyfriend Tim grabbed an issue when looking for a four-legged companion. One day Tim saw an ad that read: “Female German Shepherd. 4 months old. Family doesn’t have time or energy for her,” and the decision was made. Tim made a detour on his way home from work, and the rest is history.

When asked what activities Sadie especially enjoys, Kris laughingly responds, “Do belly rubs and butt scratches count as ‘activities’? If so, those are two. She also enjoys chasing Greenies™ Dental Treats for Dogs and, well, practically ANYTHING else.”

Kris counts Sadie’s “goofiness” and “love snuggles” among the greatest blessings she bestows on her owners. “And of course,” Kris says, “her unconditional love.”

Sophie
Lovingly Cared for by Realtor Michael B. Stoddard 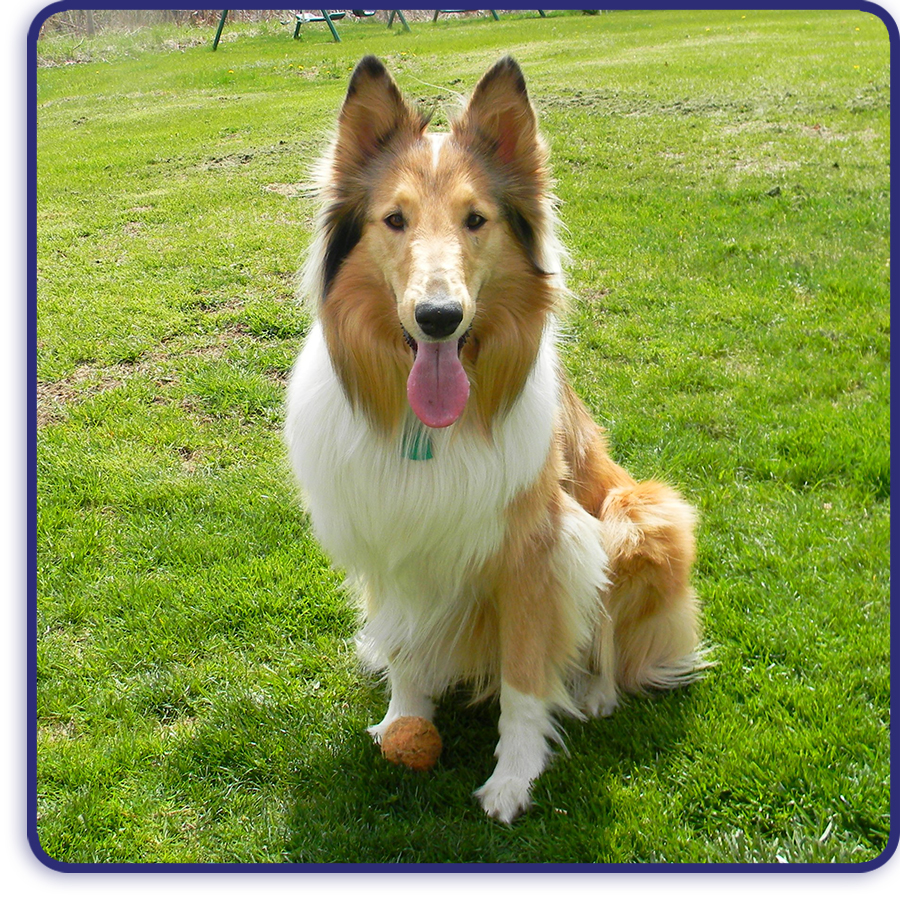 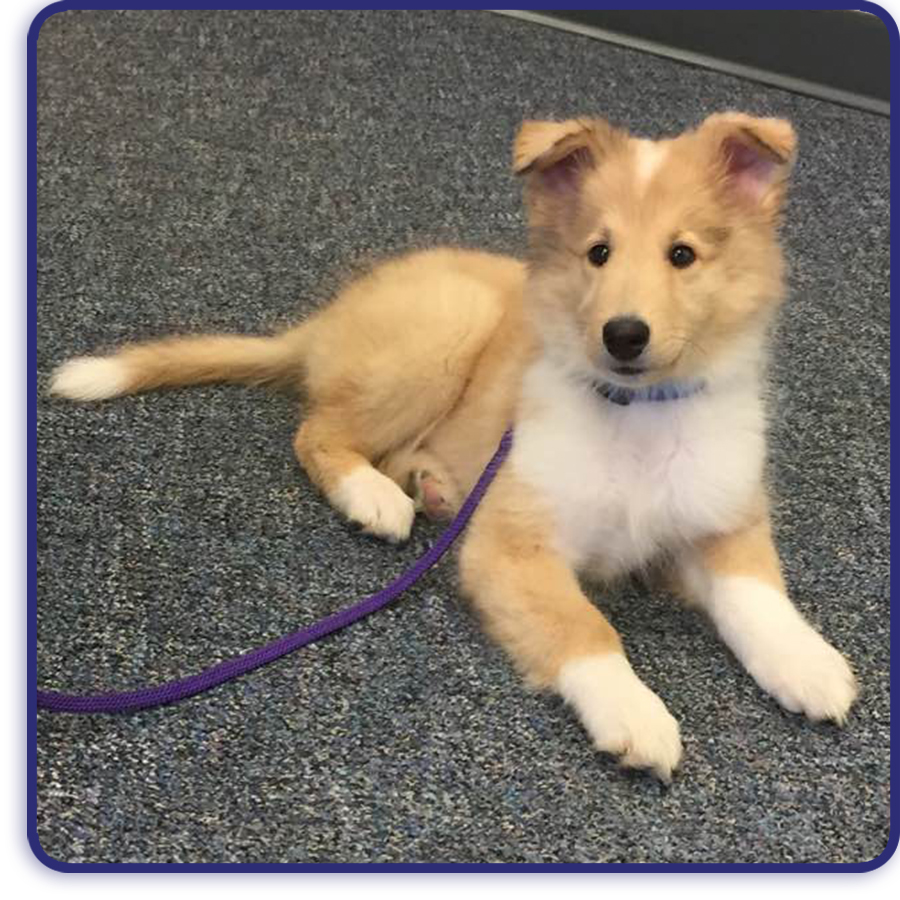 Mike has been a “dog person” his entire life, and now he’s handed down that stellar quality to his granddaughter, who took great pride in naming Sophie. Mike says Sophie had a most unusual way of introducing herself and making it clear she should go home with him. “She was pulling on my shoelaces at the time of choosing,” Mike laughs.

Although Sophie is a Collie by breed, she certainly displays some ‘retriever’ tendencies. Mike jokes, “She LOVES to catch tennis balls, and she’ll retrieve them until she can’t run anymore!”

Spending time with his little tennis champion is one of the immense blessings of his life, Mike says. “Our friendship and the bond we have is the greatest. We both light up at the end of the day when I arrive home.” 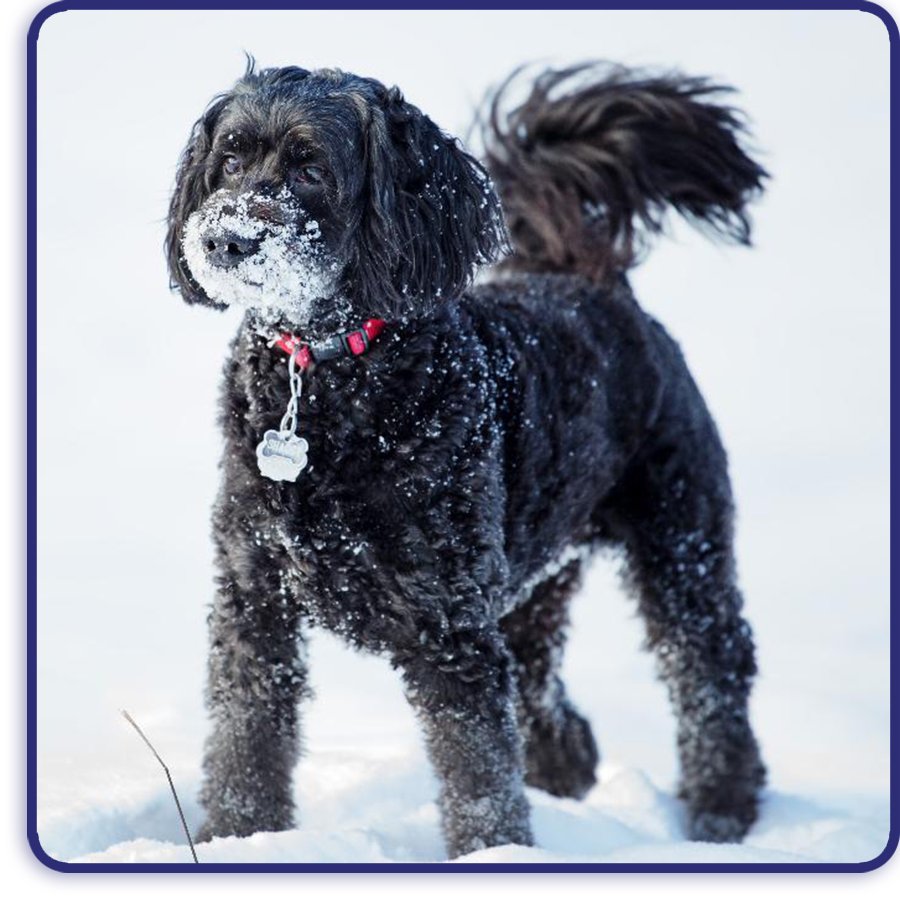 You may never have heard of the breed “Ttoodle,” but if you’re a dog lover, you may want to check it out. Go online and you’ll discover that a Ttoodle is a highly intelligent, highly affectionate “designer dog breed” created by combining a Poodle and a Tibetan Terrier.

If you listen closely, you may hear Mike Lund’s Ttoodle, Shaggy, bark with a Southern accent. That’s because he began life in the Deep South. “Shaggy came to Maine from Arkansas in an eighteen-wheeler full of similar dogs for adoption,” Mike says. “He has a sweet, loving nature, and we are so glad we adopted him.”

Has Maine agreed with Shaggy? “Absolutely,” Mike responds. “In Tibet, Tibetan Terriers are used as companions and watchdogs in the mountains. They love the snow!” 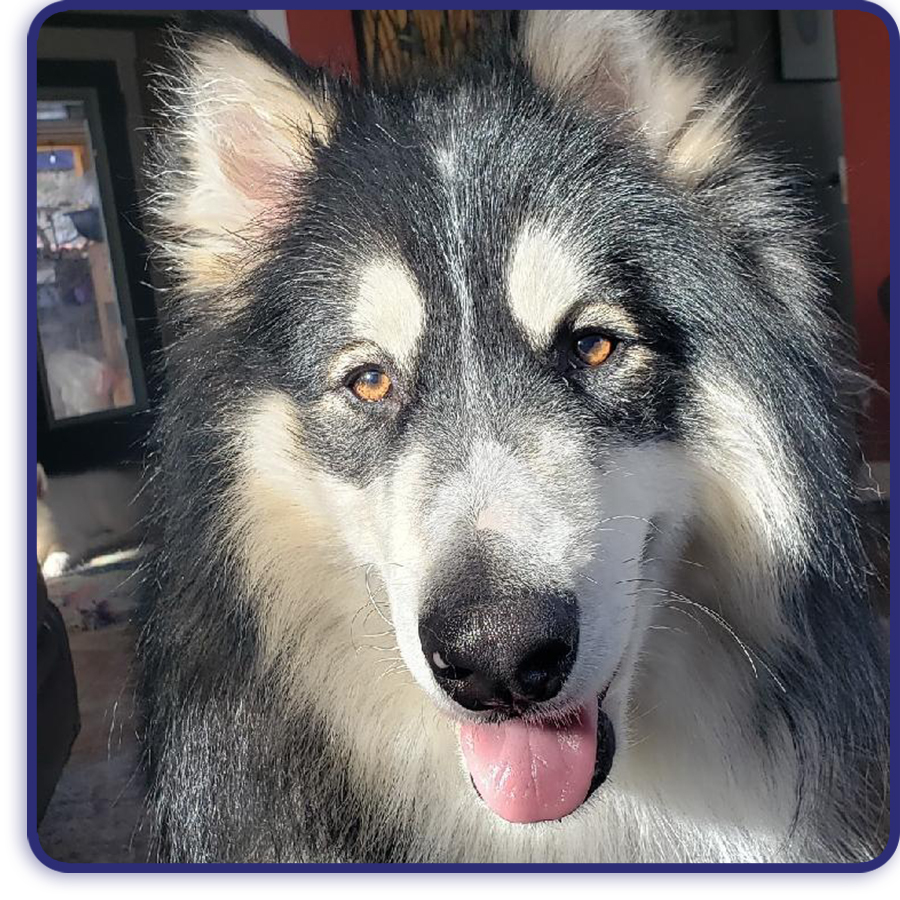 Deborah has been a “dog person” her whole life and has always had a particular soft spot in her heart for Alaskan Malamutes. “I just adore the breed,” she says.

Among Tundra’s most attractive qualities are his great social skills, Deborah says. “He really enjoys meeting people, which he often does when we’re engaged in his other favorite activities: walking and swimming.”

Like the other Rizzo Mattson Realtors dog lovers we’ve met, Deborah has a quick, passionate answer when asked how her dog enriches her life. “Tundra brings great comfort and companionship,” she says. “He is forever loyal, and a great addition to the pack….I mean, family!” 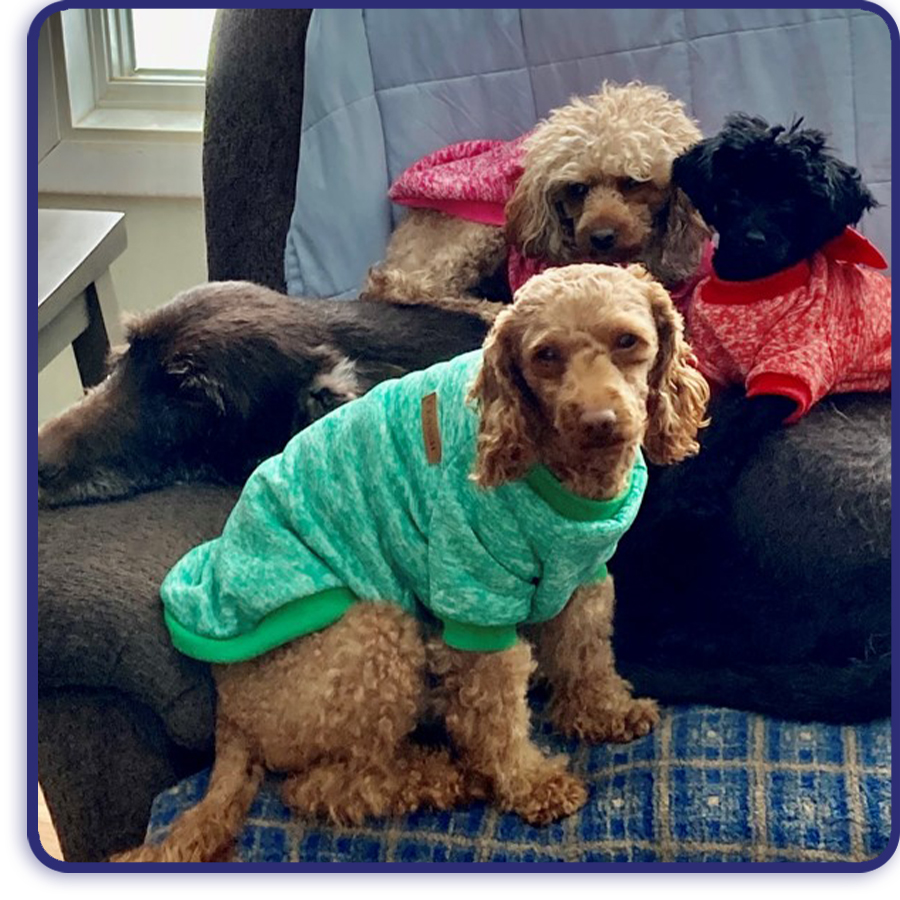 If Dr. Seuss had had four dogs, they’d likely be “Labradoodles and Mini Poodles.” Well, Realtor Alan Farmer isn’t Dr. Seuss, but Alan chose those breeds nonetheless. Alan’s beloved Lucy, Ruban, Nancy, and Maizy are the very embodiment of love for him, and each day he is grateful for all the joy and richness they bring into his life. “They’re always happy to see me,” Alan reports. “What could be better than that?”

When asked which activities he particularly enjoys with his dogs, Alan quickly responds, “I love all four of them dearly—the ladies and the gent—but I especially love hunting and fishing with Ruban. We males have to stick together.”

Thousands of dogs across Maine are looking for a warm, loving home. For information on adoption, please visit here. And when you need friendly, professional help buying or selling a house in Central Maine, we invite you to contact us today.