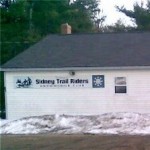 The Town of Sidney was named after Sir Philip Sidney (1554 to 1586), a sixteenth century author and military commander noted for his bravery on the battlefield.

Sidney was settled by 1760. Like other towns, it was noted for its rich soil, good for cultivating crops and for growing trees; it was thought to be one of the best agricultural towns in Maine.

The Town was formed in 1792, from part of Vassalboro lying west of The Kennebec River.  It gave part of its land to Belgrade in 1798.

The Kennebec River borders Sidney on the east and Messalonskee Lake (the modern name for Snow's Pond) on much of the west.  Summer camps, resorts, and cottage colonies also surround the Lake.

Stretching 46 square miles, Sidney's population has tripled over the past 40 years, helped by its location, between Waterville, five miles to the north, and Augusta, four miles south, through routes 23, 27, 104, and an Interstate 95 interchange.  Vassalboro borders Sidney on the east, Oakland on the north, and Belgrade to the west.

The West River Road (104), a major route through the Town, was where many early sawmills were built on or near.  Among other early industries were brickyards, tanneries, gristmills, shingle mills, textile mills, and agriculture -- the principle crop was hay, and many farmers planted apple orchards and built cider mills.

The village of West Sidney, owing largely to a stagecoach route from Augusta to Farmington, had the largest settlement. It had the earliest stores and was a trading point for farmers on the Pond Road, and for nearby Augusta, Readfield, and Belgrade.

A small shipyard building schooners of under 100 tons thrived in the Town during the 19th century.

The Town had no railroad, but two lines of The Maine Central Railway passed alongside it, one on the eastern side in Vassalboro, and the other through Belgrade, on the west.

A base for businesses big and small around its I-95 corridor, Sidney is still home to working farms and retains its rural character.

The Town of Sidney is part of The Messalonskee School District, with Oakland, Belgrade, China, and Rome (RSU 18).