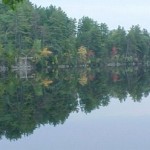 Oakland's many bodies of water and its transportation routes have formed its identity both in industry and recreation as an ideal place for work and for play.

The Town was incorporated in 1883, from parts of Winslow in 1771 and later, Waterville, in 1802.  It was formed when manufacturers who had created a separate center of activity and trade became unhappy about high taxes.  They petitioned the Maine legislature; their village, West Waterville, became a town in 1873.  Ten years later, residents voted to rename their town Oakland, possibly after its many oak trees.

Oakland is drained by four major waterways, ideal for recreation all year: McGrath Pond, Salmon Lake, East Pond, and Messalonskee Lake and Stream.  McGrath Pond forms the western boundary, East Pond lies partially within the town on the north-west, and Messalonskee Lake projects southward toward the center of town. Also known as "Snow Pond" or "Snow's Pond," the Lake was nicknamed for Philip Snow, an early settler in Sidney, Belgrade, and Rome.

Messalonskee Lake also provided the public water supply until 1995.  In the late 1980s and early 1990s, the Town of Oakland constructed a public park and boat landing on the Lake, the location of the former Portland Packing Company plant at the north end of Lakeview Cemetery.  The Lake is nearly eight miles long and is almost six square miles in area.

Today, people use the Lake mostly for swimming, boating, and fishing. The outlet, which flows northeast to the Kennebec River, powered many industries.

Before 1800, Jonathan Coombs built the first dam, sawmill, and grist mill along the Messalonskee Stream.  It became the site of several mills, and began Oakland's future in agribusiness and in textile manufacturing.

By the 1850s, a chief industry was tool making; home to several manufacturers of farm implements, such as The American Axe & Tool Company and The Dunn Edge Tool Company, Oakland became known as the axe and scythe capital of New England.

When the chainsaw and the tractor replaced these tools, the manufacturers eventually closed.

Technological advances brought newer industries, such as the Cascade Woolen Mill, and a local electric company, which was sold in 1899 and later became Central Maine Power Company.

The timber unit of the Diamond Match Company bought, transported, and produced the lumber it used to make their products. The plant made items such as ice cream sticks, swab sticks, lollypop holders, toothpicks, and woodenware.  It opened in Oakland as the Forster Manufacturing Company in 1913, which manufactured toothpicks and clothespins. In 1916, it was followed by the Berst-Forster-Dixfield Company, operating from 1923 to 1946.

In its peak years before World War II, the mill employed over 500 people and supported loggers and others who provided raw materials. The Oakland operation closed in 1983; the facility now houses Industrial Metal Recycling, which employs several dozen people.  In recent years, the Town opened a business and technology center, FirstPark, just off Interstate 95.

Farming has been an important part of life in Oakland, from survival in the early days to selling products for profit today.  The Town's fertile soil attracted farmers, and was good for grazing, dairy farming, and cultivating chief crops hay, fruits, and vegetables.

The pressures of centralized agribusiness, Maine's winters, and its geographic isolation from grain supplies led to the near extinction of dairy and poultry farming in Oakland.

Alongside agriculture, industry, and related businesses, local lakes and transportation have also played an important part in Oakland's economy.

The Maine Central Railroad from Portland to Bangor was completed in 1849. Oakland was the junction between that line and the independent Somerset Railroad, which connected Kennebec, Somerset, and Piscataquis counties, including resorts on Moosehead Lake.

A trolley line also connected Oakland to Waterville, Fairfield, and to cities farther away. Besides transportation, the trolley brought a big car-barn called Messalonskee Hall at the end of Church Street (a social and athletic center) and Cascade Park, a musical and theatrical facility.

Maine began to attract vacationers around 1870, and by the turn of the century the Belgrade Lakes area was known for its hotels and camps.  Arriving by rail, urban children and families spent entire vacations here, doubling the population and retail sales every summer.  Trains also served as the main supply source for businesses around the rail station.

Passenger transportation by rail diminished as automobile use gained momentum after World War II, and lasted until 1957. With cars and the extension of Interstate 95 through the Town, people could travel farther; Oakland saw a change in people's vacation and shopping habits.

The Town of Oakland is part of The Messalonskee School District, with Sidney, Belgrade, China, and Rome (RSU 18).