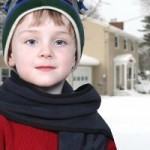 There's a long-held belief that spring is the best time of year to sell a home, which makes sense. After all, spring is about new beginnings, as the warming weather and re-greening of the landscape start, providing a sense of much-needed optimism for warmer days ahead - especially after a particularly long and cold winter. And let's not forget those tax refund checks that start arriving (for most people, at least).

And the numbers seem to support this claim. According to Time Magazine writer Mark Di Vincenzo, 60 percent of people who move do so in the summer. Washington-area Realtor Paul Valentino, a 30-year industry veteran, reports that 35 percent of sales occur between May and July, while 21 percent take place between January and March.

However, a closer look at these numbers (and the numbers behind them) reveals that other seasons - including winter, believe it or not - are also ripe for home sales.

First off, based largely on the "spring theory," there are more homes on the market during those months. With more inventory available, it's not surprising that more homes are sold in spring. But while a larger number of homes sell in that timeframe, that doesn't mean a larger percentage sell. More on that in a moment.

That's where some even more interesting facts and figures come into play.

According to real estate group Redfin, the best season of the year to sell, statistically speaking, is actually winter. After analyzing more than 750,000 new listings within a one-year period in some of the largest cities and metropolitan areas in the country, the company learned three key things that tilt the scales in winter's favor:

On top of these facts, 5.8 percent more homes listed in winter eventually sell (compared to the overall average percentage of homes sold throughout the year). By comparison, spring sales are actually 1.1 percent lower than average. This graphic presents Redfin's findings in an easy-to-read format.

While more homes may sell in spring and summer, it turns out that on average, a larger percentage sell in winter, and they tend to sell faster and for closer to asking price - all things that should be music to sellers' ears. So the next time someone says it's difficult to sell a home in winter, you'll have these facts to counter that claim. In the end, though, it all depends on your definition of "best."

Of course, it goes without saying that while interesting and perhaps intriguing, all these numbers are no guarantee that your home will sell faster, for more money or even that it will sell at all in winter or spring - or summer or fall, for that matter.

But if you're undecided about whether to list your home during the winter months, don't be afraid to come down from that fence you've been straddling and take the plunge. Who knows? You might be pleasantly surprised by the results.